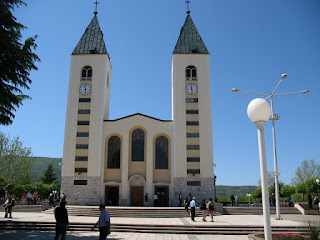 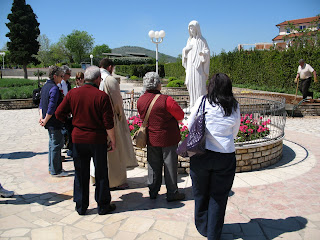 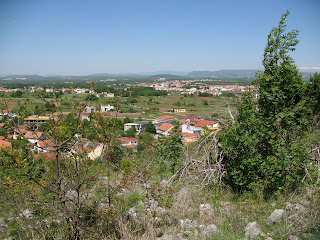 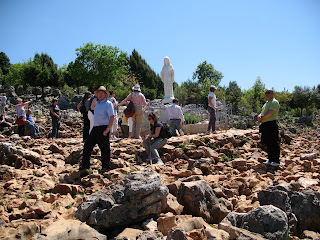 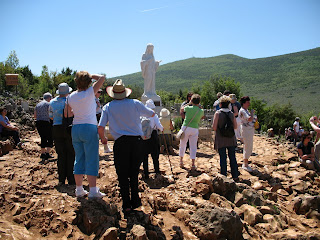 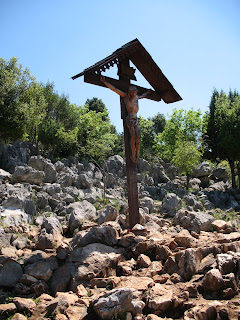 I hired a driver/tourguide for a side trip to Medjugorje, across the border from Croatia in Bosnia and Herzegovina. The Bosniaks take border crossings very seriously. Sadly, however, even with my driver asking, the Boasniak border guard did not stamp by passport.
I hired Pepo Klaic to be my driver and tourguide. He was very highly recommended by the Rick Steves travel guide to Croatia (and Slovenia). I know Rick Steves is becoming more of a "name" in the travel guide biz. And I know he has a PBS show and something of a following (although he does pepper his books with an occasional political comment that I could live without). But whatever issues I may have with Mr. Steves, he does know how to recommend a driver and guide. Pepo is an excellent driver, able to negotiate his tour bus (bigger than a large van, but smaller than a box truck) through the one-lane roads and switchbacks in the Dubrovnik area. He's an even better tour guide, with a boatload of information about Dubrovnik, Dalmatia, the Homeland War and whatever.
(Pepo is also the one who took the pictures of me posted yesterday, on the cliffs behind Dubrovnik. One picture is from the hill that was held by the Croats. The other -- the one with me gesturing toward Dubrovnik -- was from the hill occupied by the Serbs and from which the Serbs shelled the City of Dubrovnik.)
After (twice) crossing the Bosnian frontier, we headed for Medjugorje. (Twice because Bosnia has a very short Adriatic coastline that the highway passes through. Tito's idea.) Medjugorje is up in the mountains. Of course it is! The name literally means "in the middle of mountains." The Catholic Church has not officially sanctioned the visions of the Virgin Mary, who is believed to have appeared to several children from Medjugorje. Yet Pilgrims come to Medjugorje in large numbers.
Whether or not you believe, there is one real, serious "miracle" that may be attributed to Mary. In the Homeland War, the Serbs did drop a few bombs on Medjugorje. The shells did not explode. Compare/contrast with the destruction of Mostar, a city not too far away. Take what you will from that.
I did not spend much time in Medjugorje. I just wanted to get a "feel" for what the city is like, and the visitors who make their pilgrimage. Of course I took pictures (from top to bottom):
(1) The main church in Medjugorje. I did not attend a full mass, but there was an open air, Italian language mass taking place behind the main church. The church itself is rather small and modern. There is no great reliquary or ornamentation. It is functional. Much like you would find in any American suburb.
(2) A statue of Mary in front of the main church. Mary is popular here. Shes the reason for the pilgrims to make their journey. The gift shops that line the main drag are filled with Mary iconography. I refrained from going into any of the shops except to buy a bottle of water.
(3) The view of Medjugorje from Apparation Hill. More interesting than the Church in the town is Apparition Hill, a rocky, rather steep hill, where the visions were received. The hillside is packed with people climbing. Interestingly, there is no path. You pick your way through the rocks. While there is no path, there are snakes. Fortunately, I did not find this out until I reached the top and had started back down. The climb was tiring, but older people (even older than almost 50 y/o me!) with canes were able to negotiate the rocks and climb the hills, so I had no excuse for being winded once I reached the summit.
(4) and (5) The statute of Virgin Mary just below the summit of Apparation Hill. A popular photo stop, as you can see.
(6) The crucifix at the summit. Makes sense that son would be higher on the hillside than the mother, even though she is truly the guest of honor in Medjugorje.
Posted by retrofuturistic at 7:52 AM